Posted by thefondantfancy on October 31, 2013 in Cupcakes & Muffins | Leave a comment 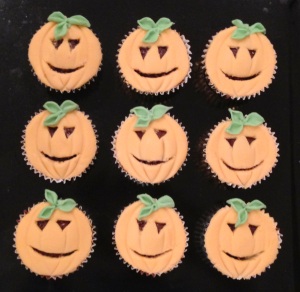 If ever there was a case for demonstrating that you don’t need lots of fancy or expensive cake decorating paraphernalia to make interesting cakes, then I hope this is it.

We’re holidaying in Scotland this half-term and it’s Halloween.  We’re staying at the lovely Gask House Farm Cottages near Inverness (highly recommended for the location, the quality of the accommodation and the hospitality of the owners if you’re wondering) and not knowing what the local ‘Trick or Treat’ situation is going to be I decided to make these Pumpkin Cupcakes as a standby in case we have visitors.

For the cakes themselves I used a chocolate cupcake recipe (replacing 40g of plain flour with 40g of cocoa powder).  For the frosting, I acquired all the ingredients at the local Supermarket including: 1 x 500g pack of white fondant icing; 1 x tube of orange colour paste;  1 x tube green of colour paste (Dr Oetker).

I used approx 80% of the icing for the pumpkin tops to  which, I am a little ashamed to admit, I added the entire tube of orange colour paste, massaging it into the fondant until evenly spread throughout.  I find the best way of doing this is to first roll the icing into a long sausage.  I then fold the sausage in half and twist the two halves together so it looks like a piece of rope.  Finally, I roll the ‘rope’ into a coil and then roll/squidge this into a ball before starting the process all over again.  I did the same with the smaller piece of icing using the green paste for the leaves.

Fortunately, I found that the cottage we are staying in has a well equipped kitchen which includes a  rolling pin to roll the orange icing out to approximately 2-3mm thick.  I then used a wine glass with the same diameter as the top of the cupcake cakes to cut out the orange tops.  It was actually my husband who came up with the ingenious idea of fashioning a triangular shaped cutter out of an old train ticket – it worked a treat.  I used this to cut out (consistently shaped) eyes.  I cut the mouths  using the edge of an egg cup and a children’s plastic beaker (the latter also being used to gently make the indentations to represent the ridges of the pumpkin surface).

I stuck the tops on using some jam which had been heated up in the microwave with a little water.  I spread this over the tops with the back of a teaspoon before sticking on the orange discs and smoothing this out with some excess icing wrapped in cling film.  I then rolled and cut out the leaves using the lid of a marker pen (which I had washed I hasten to add).  I then scored and ‘squidged’ these into a leaf like shape before sticking onto he orange pumpkin heads – et Voilà!

Overall, I’m quite taken with this Blue Peter approach to cake decorating, where the creation of the tools of the job is almost as much fun as the decorating itself.  Unfortunately, I was unable to share my creations as we were  remote enough that no Trick or Treaters came to visit.  On the plus side, we got to eat the whole lot ourselves.